Call Now to Talk With a Travel Expert: 270.217.4330 adventure@opendoortravel.org 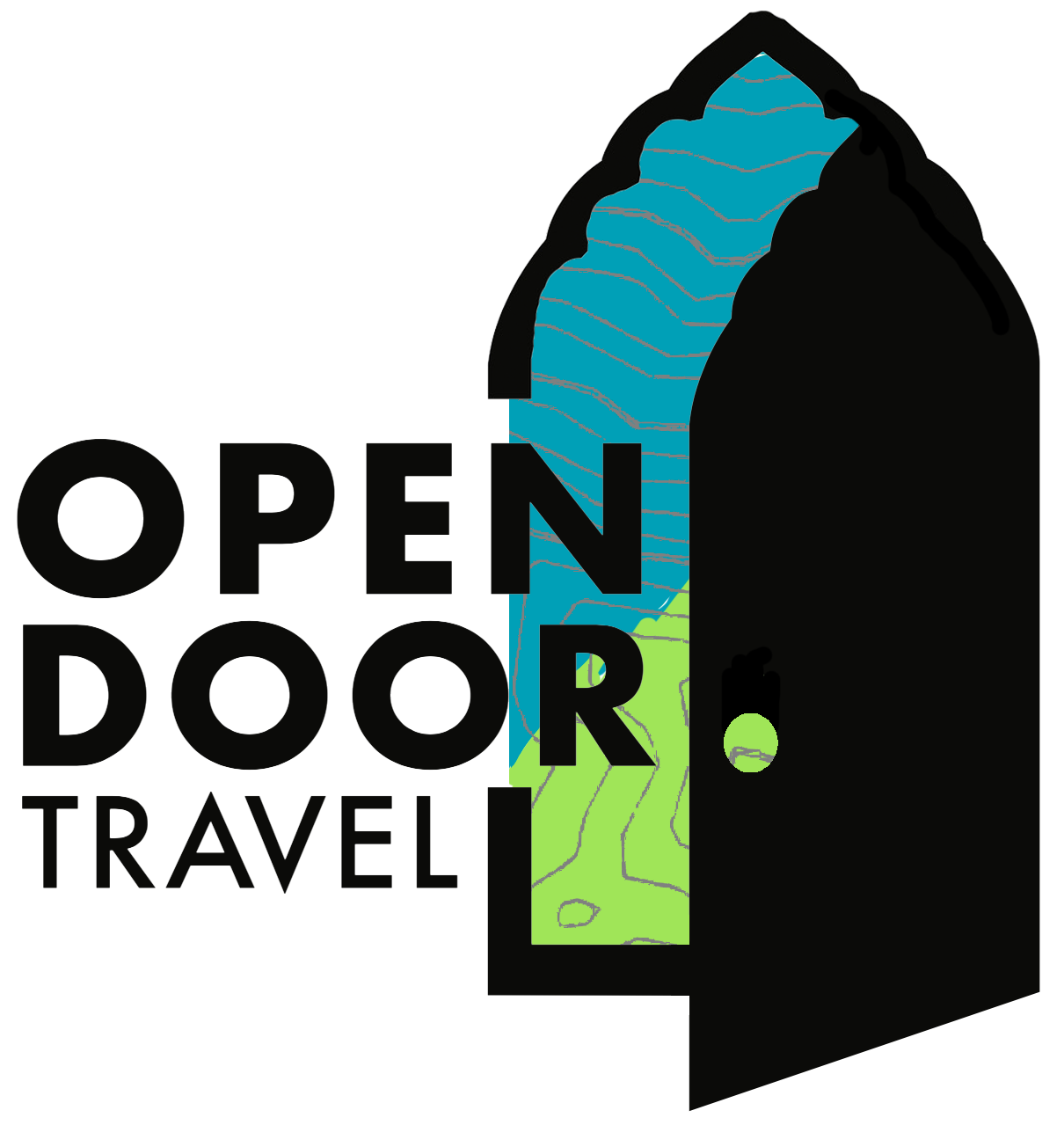 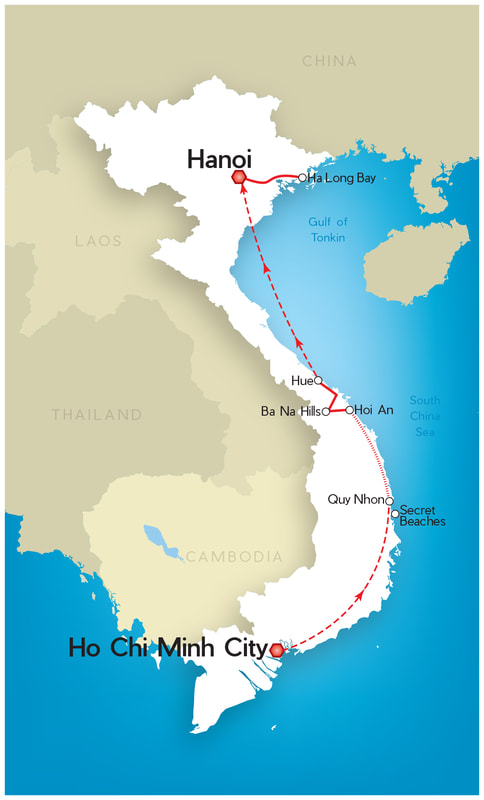 ​     To date, the only Open Door tour with a stop in Saigon! Explore the Cu Chi Tunnels used by the Viet Cong during what is known as there as the "American War." Ride in a sampan down the Mekong Delta.  Take a ride up a mountain in central Vietnam on a cable car rated as one of the 5 best in the world.  At the top, explore Vietnam’s newest sensation: the Golden “2 Hands” Bridge. This tour of Vietnam immerses you in a cultural adventure that you’ll be talking about for many years to come.  In it, you ride a water buffalo and get hands-on planting rice in Hoi An; you row basket boats with local fisherman at our “secret beach” that’s not yet mentioned in any guidebooks (there, you can also collect some of the most beautiful shells we’ve ever seen!); you can eat Tiger Lobster - the most sought-after and expensive fish in Southeast Asia - that is so fresh, my friend Muoi literally dives into the ocean to catch it for you; take a leisurely bike ride through charming villages untouched by tourism;  marvel at beautiful silk lanterns in Hoi An (the whole town is one giant photo opp!) and watch silk worms at work; “wow!” at the views as we drive along the stunning Hai Van Pass overlooking the South China Sea; visit the UNESCO World Heritage Cham ruins of My Son; learn the symbolism for dragons, phoenix, unicorns, turtles and bats and how they are used to tell stories in temples and pagodas.  These are just a few of the magical activities we have in store for you. You’ll follow that with an overnight luxury cruise amid spectacular views of limestone karsts in a part of the bay that most tourists don’t get to see.  All this while still being fully immersed in the real life of Vietnam.
This highlight tour of Vietnam is comprised of a small, 4-8 person group.  The entire tour will be a mix of urban and rural adventure and will highlight the people, culture, food, handicrafts and unbelievably beautiful landscape of Vietnam.  While staying in hand selected 3-star boutique and 4 star luxury accommodations throughout your trip, you’ll receive an introduction to Vietnamese street food, sample specialty foods of each region we visit and enjoy several multi-course home-cooked Vietnamese meals in traditional Vietnamese homes.  You’ll even join a monk for a full vegetarian meal where all the dishes look, taste and have the texture of meat (yet we promise you they're vegetarian!). And it’s so delicious, even we non-vegetarians love it!  You’ll visit Vietnamese markets and temples and learn all about the fascinating culture of the Vietnamese people.
Only 8 people will be included on thistour (but 4 guests are adequate for the tour to make). Are you a laid back, adventurous, fun-loving traveler who's up for an adventure? Then this tour has your name all over it.  If you’re ready to go or if you’d like to learn more, please call or email us.  We hope you’ll accept an invitation from Vietnam and Open Door Travel to create stories, memories and the experience of a lifetime.

Arrive in Saigon. I will personally greet each of you at the airport and either accompany you to our hotel or, if flight times require that I stay to greet other guest, I will put you on a private van who will drive you to our hotel.

With its wide boulevards, technological advancements and millions of motorbikes, Saigon, once known as the Pearl of the Orient is Vietnam’s New York, the city that never sleeps. After the war, it was renamed Ho Chi Minh City but everyone calls it Saigon. Here we’ll have one foot in the modern version of the city sampling its current offerings and one foot in the past as we visit sites of historical importance during what is known here as the American War. Among other activities, we’ll explore the Cu Chi Tunnels used by the Viet Cong, visit the War Remnants Museum and see the site where the venerable monk Thích Quảng Đức self immolated in protest of the war and the government’s treatment of Buddhists. And even though it’s part of today’s present, you’ll feel like you stepped back in time when we float leisurely in a small sampan boat down the canals in the Mekong Delta.

After all the past days’ activities, wind down for a bit during 2 nights at one of the most laid back and scenic boutique hotels in all of Vietnam right on one of my “secret beaches.” We’ll travel by airplane and van to get there. Once we arrive, the day is yours to do as you please. You’ll have the option to row basket boats and do some preeminent shell collecting if that floats your boat (har har).

The next day is full one as we travel to another of my secret beaches to meet up with my monk friend, Master Thich Dao Thanh. He’ll give you a tour of his pagoda, chat with you about Buddhism and then treat you to an unforgettable meal. It’s entirely vegetarian but every plate contains mouth-wateringly delicious food that looks, tastes and has the texture of real meat! But save room!

From that beach, we’ll travel by boat with my friends Mai and Muoi to their floating fish farm where they raise tiger lobster, Southeast Asia’s most sought-after and expensive fish. If you’d like, you can have one for your lunch and Muoi will even put on his dive gear to go catch it for you! You’ll see the interesting way these creatures are fed during your up close tour. Then Mai fixes a very special meal you won’t soon forget.

We’ll start the day aboard a train which will take us to Da Nang. In your own private train cabin, your window essentially becomes a 6 hour movie screen on which the enchantment of Vietnam unfolds. A quick van ride delivers us to our riverside hotel in Hoi An, an ancient town on the banks of the poetic Thu Bon River.

Once a major Asian trading port from the 15th to the 19th centuries, the town is now a UNESCO World Heritage Site. Graceful, historic, poetic and charming are all words that aptly describe the atmosphere which remains just as it was in its very early days. Be prepared to be smitten. Hoi An is one giant photo opp!

We’ll spend 3 magical days here. In addition to exploring exotic temples, markets and stately venerable homes in the Ancient Town, you’ll visit a silk factory and learn how locals make silk thread from cocoons of silk worms. You’ll have a whole new appreciation for rice farming after you plow a rice paddy with a water buffalo and plant and harvest rice yourself. You’ll visit another UNESCO world heritage site - the famous Cham ruins of My Son, reclaimed from the devouring jungle 100 years ago by French hunters. Unlike most tourists, we’ll visit them at sunrise before busloads arrive so you can experience the sacred energy that drew the Cham people to build their temples here.

On today’s adventure, we’ll ride up a mountain in the world’s longest cable car voted by CNN as one of the top 5 in the world. At the summit, you’ll step out of Vietnam and into a life-sized replica of a 19th century quaint French Village including a giant cathedral, full Gothic architecture and turrets. Ba Na Hills is theme park that is both bizarre and delightful in equal measure. And we’re staying at the sophisticated hotel INSIDE the park which means when everyone else goes home at 5pm, you’ll have the entire place to yourself! (Kind of like getting to stay in Disneyworld after the park closes). But the main reason we’re here is to visit Vietnam’s newest sensation that’s all the rage these days on American Facebook posts … the Golden “2 Hands” Bridge which looks like something straight out of the Game of Thrones films. Get your camera ready!

We step back into Vietnam (we never really left) and start the day with a drive over the stunning Hai Van Pass overlooking the South China Sea and enjoy a fresh seafood lunch at alluring Lang Co Beach. Then it’s on to Hue, the ancient imperial capital of Vietnam. Its palaces, temples, and tombs evoke its past grandeur as home to emperors and mandarins. Over our 1.5 days here, we’ll visit the tomb of Khai Dinh, the last emperor to be buried in Vietnam. We’ll also explore some hidden gems such as City of Ghosts and small village temples where you’ll learn how to read and interpret the symbols of dragons, phoenix, bats and unicorns.

Day 12-14 HANOI / Be Charmed by the Ancient Capitol

Board a plane to zip north to Hanoi. Founded in 1010 as Thang Long, Hanoi's narrow tree-shaded streets are filled with lovely examples of French colonial architecture. On arrival, our group lunch will introduce you to one of Hanoi’s famous dishes. Safely immerse yourself in the Old Quarter’s comical and dizzying motorbike traffic as your cyclo (3-wheel bicycle taxi) driver wheels you through the charming narrow streets of the oldest part of the city. See where John McCain was held captive at fascinating Hoa Lo Prison and take in the beauty and peaceful atmosphere at the Temple of Literature, Vietnam’s first national university. Afterwards, we’ll explore the backstreets of Hanoi via Russian Minsk motorbike while sampling Hanoi’s tastiest food offerings.

Ho Chi Minh, hero of the country and known belovedly to the Vietnamese as “Uncle Ho,” died in 1969. Inspired by the Russian treatment of Lenin and Stalin, he was embalmed and his remains are kept on display in an airtight glass coffin for all eternity … or at least as long as the chemicals hold out. Marvel at this weird communist tradition as we visit his mausoleum. In the evening you’ll enjoy a completely different kind of spectacle … the new must-see show in Hanoi: The Quintessence of Tonkin. The show takes place right on a real lake with stages that raise and lower so the performers seem to glide on water. Part light show, part ballet, part spectacle, this musical amazement celebrates the ancient culture of North Vietnam.

Today’s the day you’ve waited for! After a quick ride to Lan Ha Bay (Ha Long Bay’s less touristed identical twin), you’ll board your overnight luxury cruise ship and set sail amid the scenes in those photos you’ve been eyeing for so long on the internet. In addition to savoring the surreal scenery in the bay, you’ll also have options to explore a beautiful cave, visit a pearl farm and go squid fishing during your overnight cruise.

You’ll continue on your cruise throughout the morning, finally deboarding at noon. Return to Hanoi and enjoy some free time. Roam the quaint Old Quarter, enjoy some shopping or just kick back and relax. Say your goodbyes to fellow trip-mates over a farewell group dinner. Transports are included to take you from the hotel to the airport to catch your flight home. If you’d like to stay an extra night in Hanoi for more shopping, exploration or if your flight doesn’t leave until the next day, please let us know. We’re happy to arrange an extra night at the hotel for you.